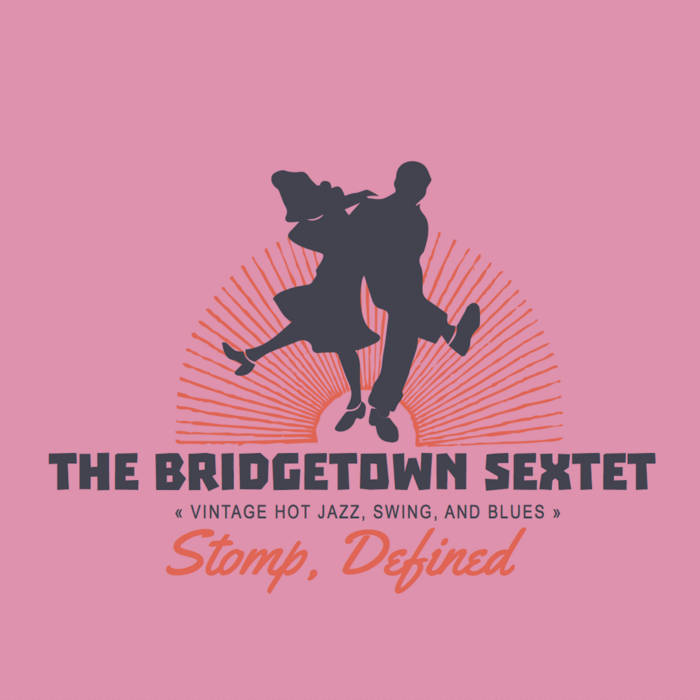 The Bridgetown Sextet, Portland's most authentic old-time jazz and swing ensemble, presents their third album, "Stomp, Defined." The Bridgetown Sextet was founded in 2008 by childhood friends Scott Kennedy and Andrew Oliver in an effort to share their love of the visceral and engaging spirit which characterized the best of 1920's and 30's jazz. Having discovered the music together in high school, they sought out a team of like-minded musicians to realize this goal, featuring long-time New Orleans musician David Evans on clarinet and sax, the virtuosic John Moak on trombone, Doug Sammons of the Midnight Serenaders on rhythm guitar and vocals and the rock-solid Eric Gruber on bass.

The band has evolved over the years to represent a uniquely energetic and groovy version of a repertoire of both well-known and little-played stomps, blueses, and swingin' tunes of the 1920's and 30's. Eschewing bland recreationism, the band draws on the original revolutionary spirit of the music and has solidly established itself as a favorite among listening audiences and swing dancers throughout the Northwest.

The Sextet's new album, "Stomp, Defined" features recordings made right before pianist, drummer, and co-founder Andrew Oliver moved to London in 2013. The music was recorded at the Map Room Studio and engineered with an authentic blend of precision and natural sound by Josh Powell. The tunes represent the best material from the band's book recorded after a marathon appearance at the Seaside Jazz Festival which allowed the group to achieve a new level of tightness and swing. "Buddy Bolden Stomp"and "Main Stem" show off the group swinging in a 1930's type groove, showcasing fluid and climactic horn solos and the rock steady pulse of Doug's rhythm guitar.

In the more stompy vein are King Oliver's "Wa Wa Wa," "Kansas City Breakdown" by Bennie Moten, and "Ozark Mountain Blues", a searing fast tune written by the Missourians, one of many "territory" bands active throughout the U.S. in the 20's. Trumpeter Thomas Barber, a transplant to Portland from New York a few years ago, guests on "Ozark Mountain Blues" and on Jelly Roll Morton's Spanish-tinged "Original Jelly Roll Blues", the first published jazz composition.

Vocalist Dee Settlemier of the Midnight Serenaders makes a guest appearance on "He Likes it Slow," a raunchy blues from the repertoire of Louis Armstrong's hot five. The album also features a tango-infused solo piano version of Morton's "The Crave" recorded by Andrew in London, and Scott, Doug, and David fill the album out with relaxed trio renditions of "Lulu's Back in Town" and "Baby Won't You Please Come Home."

Mixed and Mastered by Andrew Oliver
Art and layout by tinylittlehammers